SYTYCR Round 2.1: Rick von Sloneker VS. Macaulay Connor (THE GIRL WHO LEAPT THROUGH TIME)

Welcome to Round 2! We now begin pitting winners against each other… and things get much more interesting. For this first battle, we’re looking at a time travel anime, The Girl Who Leapt Through Time. This battle sees Rick von Sloneker, who won his first battle with Speed, against Macaulay Connor, who won his first battle with another animated film… Batman: Mask of the Phantasm. Now it’s up to you who will move forward to Round 3. Read, vote, comment, enjoy! You have until Wednesday. Below is the updated bracket. Click to make it bigger.

You don’t need to be an anime connoisseur to appreciate Mamoru Hosoda’s 2006 film Toki o kakeru shôjo (or The Girl Who Leapt Through Time). Driven by a dense but consistently intriguing narrative, the film—like many other time-travel tales—touches on issues related to fate vs. free will and selfishness vs. sacrifice. Is the film’s protagonist using her seemingly unique abilities purposefully? Or are her actions causing unintended—and potentially irreversible—harm? For most sci-fi fans, this is familiar material, but the execution is strong enough to forgive both the copious amounts of high school melodrama and the vague sense of “been there, done that.”
The aforementioned protagonist is Makoto (voice of Riisa Naka), a plucky tomboy who’s admittedly not the brightest nor the most coordinated girl in her school. She’s a regular on the baseball diamond with her two best (male) friends, Chiaki (voice of Takuya Ishida) and Kousuke (Mitsutaka Itakura). The trio is virtually inseparable, though Makoto insists her feelings toward each boy are entirely platonic.
One day, Makoto is stumbling around the chemistry lab, when she slips and falls on something and experiences something intense, surreal, almost indescribable. The feeling lasts only for a few moments before it subsides and she moves on. But the next day, the breaks on Makoto’s bike fail at an incredibly inopportune moment. She careens wildly down a steep road toward an oncoming train and certain death. With impact just an instant away, the feeling returns and Makoto is suddenly halfway back up the hill and relatively unscathed.
“Leaping through time” is what Makoto’s oddly prescient aunt calls her startling new skill, and the young girl just loves it. She starts leaping to perform better on tests, avoid embarrassingly clumsy moments at school, and eat the last pudding before her sister beats her to it again. But when Chiaki confesses to liking her, Makoto leaps to avoid the conversation entirely. It’s situations like this, when people’s feelings get hung up in her leaping, that turn Makoto’s whole world upside down.
You never get the sense that The Girl Who Leapt Through Time is spinning its wheels, but all throughout the film’s first two thirds, the end of the road seems hazy. Much of this has to do with the film editing, which is delightfully chaotic, but the emphasis on the interpersonal relationships gives one the sense that Hosoda and company aren’t exactly swinging for the fences here. Will The Girl Who Leapt Through Time really only follow Makoto’s emotional quest to admit her feelings to the boy she totally thinks is cute and stuff? Thankfully, no, but it does feature prominently throughout the entire film, even the much juicier final third. It ultimately works because we care about Makoto, but there’s no denying the film is on much firmer ground once the time-travel machinations really kick into gear.
And boy, when this film gets going, it does so in a big way. The dramatic climax is a genuinely surprising switcheroo—the kind of giant swerve that derails a lot of films but manages to set The Girl Who Leapt Through Time on a much more satisfying path. Around every corner, another piece to this complex puzzle falls into place, which means The Girl Who Leapt Through Time is one of those rare sci-fi beasts whose conclusion feels satisfying when it comes to both character and story arcs.
As much as we like Makoto and want to see her grow, there are times when both the way she’s written and the way Riisa Naka voices her threaten our allegiance to her. She has, hands down, the most annoying laugh this side of Fran Drescher, and the amount of times she violently hits her head would be comical if it wasn’t just a smidge annoying. As far as her actions go, they aren’t so selfish that we can’t sympathize with her, but they’re certainly a little childish.
The Girl Who Leapt Through Time doesn’t enchant the same way the very best Miyazaki films do, but it’s certainly a film worth watching. The animation itself is simple, but Hosoda (best known for, of all things, Digimon) gets creative when appropriate. He also makes terrific use of sound (rhythmic grasshoppers frequently threaten to lull you to sleep before you’re jolted awake by the sound of another Makodo leap). If you’re a fan of movies with time travel, this is certainly one for you. It’s no The Terminator or Back to the Future, obviously, but it’s a perfectly respectable entry in the sub-genre.
———————-
Review #2
By Macaulay Connor

The Girl Who Leaped Through Time


In 1967 Japanese writer Yasutaka Tsutsui wrote the third novel of his (ultimately) celebrated oeuvre of works. The novel “Toki o Kakeru Shōjo” (or “The Girl Who Leaped/Ran Through Time”) endured as one of his most popular and has adapted multiple times on film, television and theatre. It examined the tale of a middle school girl – Kazuko Yoshiyama – accidental ability to time travel through a time leaping drug. I include this preamble because Mamoru Hosoda’s The Girl Who Leapt Through Time, though oftentimes – erroneously – referred to as an adaptation of Tsutsui’s novel is, in fact, more of a loose sequel. Makoto, the seventeen year old protagonist of this incarnation, is the niece of the original time-leaper of Tsutsui’s imagination. While at school an unfortunate tumble in an empty classroom leads Makoto to discover a walnut-shaped object which in turn leads to a series of shenanigans…. 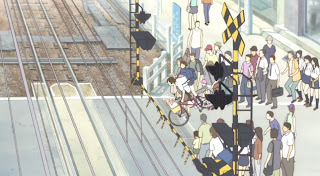 But shenanigans seem to be a de facto part of Makoto’s life – time leaping or no. I’ve observed a curious tendency of anime films where the characters generally exist in a pronounced state of freneticism and it’s all too applicable to Makoto. “In general, I’m quite cautious” she tells us in an early voice-over, but we’re not given any evidence to support this. She wakes up late, wolfs breakfast, arrives late at school unprepared for a pop-quiz, endures a series of pratfalls (one of them whilst discovering that walnut-shaped object) and in a bizarre shift early in the film seems to be hurtling towards her death when….she leaps back in time. So, raise your hands if an experience like that would send you charging to check yourself into the nearest psychiatric ward for evaluation? In real-life we might spend two hours in a precise Von Trier like character study watching Makoto reeling from the implausibility of the experience. However, like so many protagonists in science fiction films, although Makoto is somewhat taken aback by her ability initial she soon accepts it as something par for course. Her aunt Hosoda, the original leaper, (the only persons she betrays the information to) is the one who significantly gives a name to her ability. 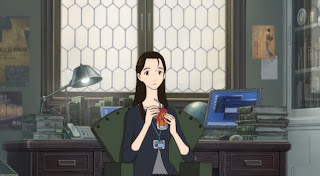 “You’re leaping through time. Time is irreversible, you know. Which means you were the one who went back in time. It happens to many girls your age.”

It’s a deft trick from the screenwriters. It functions as a dovetail managing to be a sly wink to the original text while explaining away (but not altogether) this bizarre gift. And, at seventeen, and with her penchant for the frenetic Makoto is not too invested in where the gift’s origination. She is content simply using her powers for the mundanities of everyday life – leaping back to pass tests, eat her favourite meal, play karaoke, avoid awkward romantic conversations with a friend – and as the film hurtles past its half way marked its purpose seems assured. The excitable Makoto shall realise that time truly waits for no one and that manoeuvring time for incidental personal gain is only satisfying up to a point. And these things do occur but the how is what intrigues because the film moves from what seems a singular dissertation on coming-of-age machinations to a dissertation on morality amidst a not-quite-fervent love story.

My Aristotle is just the teensiest bit creaky but the way that the final act reveals how the time-leaping occurs and WHY it occurs reeks so much of his belief that true art should focus not on the mundane but on the truly “important” concepts of life. As a pivotal conversation with a true time-leaper just over the one-hour mark unfolds it seems decidedly at odds vibrant playfulness of the first two thirds as it becomes (but briefly) something more didactic. Of course playful vibrancy can be a tool for learning as much as more obtrusive teaching moments but it’s fluidity from liveliness to philosophy which the film does not quite manage to master. The romantic conceit play truer to form because the way it burgeons from the most innocuous of moments to an almost almost heart-wrenching tale of tragic love is indicative of all the hyperbole which comes with typical teenage life and because it merges with the philosophising of the last half hour its overwrought nature becomes less a crutch which the film must overcome and more of a humorous nod to the way that – when a teen – everything seems to be of life-and-death significance (and, admittedly, Makoto does have life and death issues to deal with). And, the love-story angle becomes the gate-way through which the film ultimately meets its initial goal of allowing Makoto to come-of-age making way for nice reiteration of the film’s rather literal title. 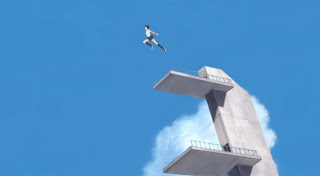 It is the literal leap through time which allows Makoto to make that leap to maturity at the film’s end. And, these are the minor details which underscore the film’s appeal even when at its most unwieldy. Like, the importance of the time-leap precipitant being in the shape of a walnut (when walnuts are mythically a nod to the god Dionysus’ woman Carya who became an oracular tree) or Kazuko (the aunt) working in an art gallery (for what else can manage to outlast time but the permanence of art?) It’s easy to see how these themes might have worked, perhaps more effectively, in novel form but Hosoda attention to detail – in the oddest of places – and the deftness of Satoko Okudera’s screenplay make this a 90 minutes well spent. I suspect that those not inclined to the spiky hairs and reddening faces of anime films might be turned off by the look of the film, but even as the occasional character work is quite broad the animation captures the mistiness of the sun-soaked playfield and the intensity of the clouds (just look at that shot third shot above). Perhaps, not quite a visual triumph but appealing nonetheless. Oh, sure, it fumbles just slightly by not allowing itself to be confident in its own initial playfulness – which the tableau itself visually endorses. And, by doing so it does lose some of its panache but as the film leaps through from plot-point to plot-point, its heart is in the right place, always.

12 Responses to SYTYCR Round 2.1: Rick von Sloneker VS. Macaulay Connor (THE GIRL WHO LEAPT THROUGH TIME)

Vote for February's Movie of the Month!